The average intake of a human and a TV screen is increasing. But, hell... I can't remember what I watched. So, I've only got two stand-out TV shows that I know were new in 2017:
Older shows watched in '17, ranked: 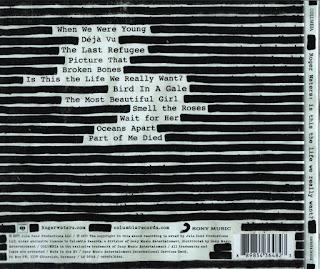 Is This the Life We Really Want?
Roger Waters

Ignore all controversies over the man and focus on the artwork. From an angry Brit ex-pat comes a symbol to the American condition. It's The Wall updated for a 21st century angst. This is the timely protest album you want.

I rarely have patience for rap/R&B, but this album caught my attention. Check out "Element", "Humble", and "Fear" now.

Hyped as SAY10 and delayed for quite awhile, this album delivers with songs like "Saturnine" (read the lyrics) the pseudo-title track ("Say10"). "We Know Where You Fucking Live" shows Manson hasn't lost his anger.

Never really liked this band until I heard this album. "This is the World of the Theater" and "Second Sleep" are good starters. More like White House Conditions, am I right???

Has Star Wars always been painted into a corner? Has the 1977 action classic doomed it with an unavoidable fate?

With a title like Last Jedi, any cinemaphile should roll their eyes. The "last" of something is so silly because nothing really ever dies or ends in our culture. Last of the Mohicans, Last Man Standing, Last Action Hero, Last Days, Last Waltz, Last Picture Show, etc etc etc. This isn't Freddy vs. Pinhead vs. Jason vs. Pumpkinhead: the Last Nightmare we're talking about here--this is holy Star Wars! Putting "the Last [...]" or "American [...]" in your movie title is quite unoriginal. Why are humans so interested in starting over?

The theme of the film is "failing is the best way to learn". Going in, I was expecting an Empire Strikes Back "downer". Instead I got something... unpredictable. I'm still not sure if I love it or hate it (probably something in between). I recall many corny jokes (they won't age well, trust me).

The Harry Potter-esque space horses were distracting, as were the stupid crystal foxes. Those moments were definitely not Star Wars (and bad CGI).

It was weird seeing Yoda, which most people revere as a divine character in all of cinema. He was giggling a lot, which I don't remember happening during Luke's training sequence (after the first meeting). Anyway, I'm OK with Force Ghost Yoda. Thank god he wasn't CGI. And I'm OK with all of it--burning it all down; doing the opposite of everything expected.

But, I know that Disney will look at the numbers and want something more safe for the next episode. This is probably one reason that JJ Abrams is coming back. I don't want that.

Let's do a thought experiment for an Alternate Reality. What if Star Wars Episode XIII was a predictable sequel? Storyline: Rey is trained by Luke; Luke and Rey fight Snoke, killing Luke; Snoke reigns terror, causing Ben Solo to turn to the light side. Rey joins forces with Ben with a possible romantic undertone. Finn & Poe help out a lot, but the First Order still threatens in the end.

Would that satisfy? In this Age of Fan Service, does anything? The answer depends on the execution: cinematography, sound, acting, and editing all can make or break a film. The story isn't as important as you think.

Is the mark of a good film one that makes you excited for what happens next?

What is the name of the next Episode? Ideas:

I also want to take a moment to stress that the original Star Wars trilogy is NOT sci-fi. It's an action movie, for one. Sci-fi is usually slow and deals in physics and hard science. The Force is magic; the Jedi is spiritual--two things right there that disqualify it. Star Wars is fantasy--implausible in the real world. Yes, many of the characters are considered "human", but they aren't from Earth. And, Jesus Christ, Leia flying through space was pure fantasy.

I just learned that the shitloads of old Star Wars books from the 90s were declared non-canon and replaced with canonical Disney books. I never consider franchise books part of canon, especially if they are spawned from films. Oh well, I've never read any of `em!