I was watching The Blue Brothers on VH1 Classic the other night, strictly for the ending. If you have not seen this 1980 classic, it has one of the best climaxes of all time. It just keeps escalating and escalating. It's police car pornography.

Anyway, I watch the whole film, anticipating the build-up, then I come to the car chase into the City. And, the Illinois Nazis join in. And the Blues Brothers are having engine trouble whilst dodging bullets. Jake & Elwood drive to an unfinished bridge, and slam on the brakes to avoid a certain plummet. Then, something miraculous happens. Something I have seen one hundred times and simply accepted. The Bluesmobile thwarts the Nazi pursuit by an end-over-end slingshot, and landing safely in the opposite direction of danger. It defies logic, and I say (out loud), "magical realism!"

My mind immediately stirs about the idea. A film, an American film, that threw in a magical element just for kicks. Yes, it could have been script writer's laziness (there are a lot of unexplainable parts in that film), but, I kept going over it in my head: magical realism. A term associated with Latin American writing in the 50s, no less. And, I run the entire film--scene by scene--in my head to discover that this could totally be a Hispanic story. 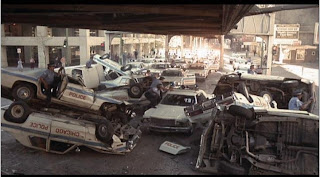 Imagine Jake & Elwood Blues being Latino. Jake is getting out of prison, for one. As the film unravels, a rich layered story unfolds (just like magical realism fiction). They go to their Catholic orphanage and are asked to save the church. A bit Spanish, no? They go to a revival, and Jake sees the light (salvado). Magic in the grit of blue-collar Chicago.

I've mulled over how to define magical realism, compared to fantasy, sci-fi and even just realism. The best way to put it, in terms of film is: Realism is 100% reality; Magical realism is 98% reality and 2% magic. "Fantasy" can be anywhere from 50% reality to 1% reality (the remainder magical). Most importantly, the magic has to be accepted.

The more that I think about it, the more I see magical realism in film. Especially in the pre-CGI days of the 70s and 80s. For one, Jaws is almost magical realism. Everything is steeped in reality in that film except for one thing: an vengeful, oversized shark.The problem with almost is that they don't quite accept the shark's "magicality" until later in the film. If Chief Brody and Hooper would have just listened to Quint, this would be pure magic, and not horror.

If the horror is accepted, then it is magical realism? I think I'm on to something here! Maybe The Shining? I don't know... more research needed.
at February 29, 2012 1 comment:

The curse of the trilogy

I was watching a video review of a game (Mass Effect 3), and had a realization about the "Curse of Three". The concept is all around me, but I never came to fully understand it until now. The first sequel is awesome; the second sequel sucks.

This is a rule (with exceptions), but I am going to focus it on movies, especially action movies... like The Dark Knight Rises. This threequel has no chance of being great.

1. Weird title. Yes, the second film was open-ended, but what film isn't these days. This is basically watering down a classic comic book. How about The Caped Crusader, or Batman Ends (get it)? It's a lack of imagination, and it reminds me of the Star Wars trilogy.

2. History repeating itself. Remember Batman Forever? It had Jim Carrey as the Riddler (which was awesome), but pretty everything else was horrible about this movie. They knew the franchise stakes were high;' they went completely crazy on this film. I'm talking about all the fluorescent colors and A-list actors. Yes, it was entertaining, but in a Val Kilmer kind of way.

3. Fanboy influence. Eventually, a franchise can't hold back the cultural influence of fans. They raid the temple; permeate the writing process. Expectations become out of control. Eventually, they want to throw in a flying batmobile.

4. The tagline: "The Legend Ends". Huh? How does this work? I thought, "Heroes get remembered, but legends never die". How am I going to tell my children about this one?


The Christopher Nolan Bat-trilogy is supposed to be more intellectual, more dark... but I think at the end of the day it will be the Tim Burton era that gets those nods. Is Nolan the ultimate "Batman done right"? We forget that Batman is a comic character, and his film persona will always be compared to that.
at February 14, 2012 1 comment:

On Obama, Artificial Intelligence, Getting Ahead at Work

Obama's gonna win again. Is there any doubt? If there is, you’ve been watching too much TV. I mean, Barack’s done nothing horrible, nothing immoral. Maybe be a little un-American (can you blame him from distancing himself from the tacky parts of our country?). This President never dons a cowboy hat. And, Tacky America makes us look like cattle.